When someone approaches me about producing a book, we engage in a dance in which we determine whether we’re going to be able to work together successfully. Usually, this takes no more than a couple of emails or a single phone call. Sometimes—as in a recent case—it takes a little longer to get to the crux of the matter. But in replaying this recent exchange in my mind, I think I’ve hit upon a key factor that I hadn’t considered before.

There’s a certain pragmatic way of looking at the world based on the assumption that what I want to do is the right thing to do and that all I have to worry about is finding people to carry out my wishes. This is the top-down approach taken by many of the gurus of success. Don’t bother me with the details, ’cuz I’m a big picture thinker. Just tell me the bottom line and maybe three bullet points, and you take care of the little stuff. And be quick about it. I want it yesterday. The typical grumble from the subordinates of a manager with that attitude is: “There’s never time to do it right, but there’s always time to do it over.”

Frankly, that approach does work for a lot of people and in a lot of situations. However, publishing your first book that way takes deep pockets, because it inevitably leads to failure on the first go-around.

I’m a bottom-up sort of person, though. I like to understand the fundamental principles of a discipline and then build on those principles with practice until I develop a level of expertise that enables me to confidently market my services. Admittedly, this takes patience. And I’m a patient guy.

But I’m not a doormat. And when someone with a top-down mindset comes to me and tells me what I’m going to do for them and what they intend to pay me, then refuses to provide the basic information I need to do my job to the standards I’ve set for myself, I tend to get my back up. The customer may always be right, but not everyone is destined to be my customer. The ones who are destined to be my clients are people who share my bottom-up, craft-based view—authors who have developed their own expertise in the same way I’ve acquired mine and who are willing to learn about how publishing works so they can improve their chances of success the first time around.

Coulda happened to anyone.
Posted by Dick Margulis at 9:19 AM No comments:

Maybe that should be a very little font humor. Thanks to colleague Geoff Hart for the link.
Posted by Dick Margulis at 4:31 PM No comments:

UPDATE
Never mind. Apparently the interview was yesterday.
Posted by Dick Margulis at 1:14 PM No comments:

To the bottle quickly

An author’s take on the book publishing process, with this memorable line: “Copy editors check each and every little fact, and whatever they come across the make a note that the authors have to respond to. Going through a copy-edited manuscript will send one to the bottle quickly.”

In all the old movies it was the editor who had the bottle and two glasses in a desk drawer, not the author. And there are days when I understand why. It’s nice to know the feeling is mutual.
Posted by Dick Margulis at 9:05 AM No comments:

Giving a fig, or life beyond the reach of the Internet

Editors do not live by bagels alone. There’s babka*, too.

We used to have a bakery in the neighborhood that made an excellent babka. They even set up a mail order babka business and a website. Alas, they closed their doors last year. I mostly managed to avoid indulging in their babkas, as they would have been the ruin of me. So I don’t particularly miss them.

Last week, though, someone sent my wife a thank you gift for her office consisting of eight babkas, two each of four different fillings. It was decided (passive voice to protect the identity of the decider) that one of these had to come home, and the one my wife picked out had a wonderful fig filling. This is something I had not encountered before, and search engines confirm that it is not a traditional filling.

I thought, well, this bakery must have a website. But no, Google can’t find that, either, beyond a directory listing (if I guessed correctly at the name of the bakery).

Anyway, if you’re anywhere within an easy drive of Newton, Massachusetts, check out Blacker’s Bake Shop, 551 Commonwealth Avenue. The chocolate babka is just so-so, but the fig is to die for. In addition, the woman who asked a relative to buy and ship the gift to my wife was distraught to learn that the package had not included any apricot-almond babkas, suggesting that might be a winner, too.

And if you go there, ask them why they don’t have a website.

* There are several sweet goods called babka, but I’m referring specifically to the fairly dry but rich sweet dough with a rolled-in filling and a streusel topping, made up as a high, rectangular or round loaf, found in Jewish bakeries. Common flavors are chocolate and cinnamon.
Posted by Dick Margulis at 7:54 AM No comments:

I just stepped outside to take a break and enjoy the cool back yard after a rain. I found myself stooping to pull the occasional weed, and the parallels between gardening and editing suddenly struck me. (Why this never occurred to me before I have no idea.) I’m not quite sure where this is going, but indulge me for a few moments and maybe something will strike you as instructive.

A man of words and not of deeds
Is like a garden full of weeds.

I get manuscripts in all conditions. One might have just a handful of errors, like a well-tended garden with just the occasional small weed that managed to escape the gardener’s eye. Another may look more like an abandoned yard, with weeds everywhere and just a hint of what was once cultivated there.

In the former situation, a visitor with a practiced eye can stroll through the garden and stoop occasionally to remove the offending plant. In the latter, it may be necessary to destroy the garden in order to save it. And even then, “one year’s seeding is seven years’ weeding”: it will take many passes over a long period to make the plot manageable.

Structure
A couple of weeks ago, I was standing in my kitchen, drinking a glass of water, when there was an enormous flash and simultaneous crack of thunder. I knew something had been hit, but it wasn’t until the next morning that I saw the damage. A large tree in our yard had exploded (there was no charring; the lightning had apparently superheated the water inside the trunk). Clearly, the tree had to come down. However, the bones of the garden were so well planned (several owners ago), that after the tree’s removal, the structure of the garden remains. The gap is not even noticeable, as the adjacent trees still define the wall of that particular room.

There are times when a book suffers a corresponding injury: A passage the author wanted to quote has to be eliminated because the rights are not available or affordable; events overtake the book and the thesis of a chapter or section turns out to be unsupportable; a co-author’s contribution fails to materialize. And, as in the case of the well-architected garden, the well-structured book survives the excision.

Choosing plants
The skillful gardener has a theme in mind to apply to each room—perhaps it’s a succession of bloom in a single color; perhaps it’s a riot of nighttime fragrance; perhaps it’s a colorful hodgepodge designed to attract hummingbirds; and so forth. Plants that are tried but don’t work to advance the theme are ruthlessly extirpated.

Similarly, the editor is on the lookout for sudden and awkward shifts in tone or mood that bring the reader up short.

Cultivation and fertilization
Gardening is a dirty business. Spading, fertilizing, planting, watering, hoeing. Wear old clothes and leave time for a shower before you show off your handiwork.

Producing a book can be just as messy. The art is in producing a finished work that doesn’t show where you ripped out and reset a brick path or where you uprooted a large rhododendron. The goal is to have the reader marvel at how easy it must have been to edit such a well-put-together finished book.
Posted by Dick Margulis at 12:55 PM No comments:

A virtual acquaintance of mine, a long-time denizen of a couple of mailing lists I’ve been on, turns out also to be a big shot in the world of Renaissance Faires and Elizabethan-era re-enactors. For a number of years Maggie Secara has been the proprietress of the elizabethan.org website, where she gradually accumulated hundreds of little tidbits that help lend authenticity to the speech and actions of re-enactors. A few months ago, Maggie approached me about printing her Compendium of Common Knowledge 1558–1603 as a book. 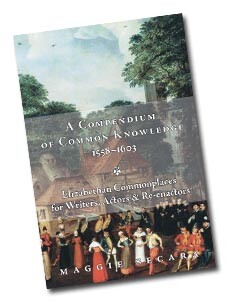 The book is out and available. I learned all sorts of fascinating details while I was working on it, and if you’re as enamored of trivia as I am, you’ll enjoy it too. And it’s a perfect gift for a history buff. Maggie that document Maggie is also the eponym of the ultimate corrupted Microsoft Word document rescue technique that has come to be known as maggieing the document. Or maggying the document. Nobody really knows how to spell the gerund. Nonetheless, if your Word document starts to behave badly and you’re afraid it may be irretrievably corrupted, you should maggie the document. (This applies to version of Word up through Word 2003; Word 2007 documents are constructed quite differently and should not become corrupt in the same ways older documents can.) Here’s how you maggie a document.Note that you would not have known this procedure had you been a contemporary of Shakespeare. I just thought I’d toss this in as a bonus so that you could puzzle over the sort of mind that can repair Word documents Monday through Friday and transform itself into the countess of Southampton on weekends.
Posted by Dick Margulis at 9:15 PM 3 comments: